Over the last few years, important progress has been made in ensuring that the majority of the video content available on the internet includes closed captioning features to allow people with hearing difficulties to enjoy a wide range of video programming.

What is Closed Captioning?

Closed captioning is the visual display of the audio component of video programming. It is designed to assist the deaf or hard of hearing to follow both the spoken dialogue as well as non-speech information, such as the identity of speakers and any significant music or sound effects. The term “closed” indicates that the captions do not appear unless activated by the viewer.

Many people use the terms “closed captioning” and “subtitles” interchangeably but there is a distinction between the two. Subtitles assume the viewer does not have hearing difficulties but instead cannot understand the language or accent, so this feature tends to only display dialogue or on-screen text appearing in another language.

In 2012, the Federal Communications Commission (FCC) put in place rules requiring that closed captioned programs broadcast on TV be captioned when published on the internet. The implementation of these rules form part of the 21st Century Communications and Video Accessibility Act of 2010 (CVAA).

The rules also require video programming distributors that broadcast on TV to post captioned clips of their programming on their own websites or applications. At present, these rules applying to video clips do not apply to third-party websites or apps.

For archival internet video programming that a distributor already shows online, the distributors have up to 15 days after the date the content is shown on TV with captions to ensure the Internet programming has closed captions.

If people discover that distributors or content providers are not complying with the FCC regulations, they have a right to lodge a formal complaint either with the FCC or directly with the distributor or provider. For additional details on the FCC requirements to promote better access to telecommunications services for people with disabilities, visit the FCC's Disability Rights Office website.

Ultimately, these regulations have been developed and phased in to encourage content distributors and programmers to ensure that all content is distributed with accessibility in mind. It also serves to benefit people who might not have hearing difficulties but still utilize captioning, such as people trying to display or watch content in noisy environments, stores, or waiting areas. 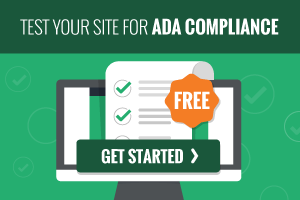 What is the Accessibility Canada Act?