The time to perform full accessibility testing on a mobile app for iOS or Android is before making it available for purchase or download. In addition to opening the door to litigation for disability discrimination, releasing an app that isn't accessible can damage its reputation from the beginning, and new tech only gets one chance at a first impression.

Relatively new social media app Clubhouse provides a case study in this and it will be interesting to follow if there are any developments. The app is a conversation app that relies on producing and understanding verbal speech. Almost immediately, questions came up about what this would mean for deaf and hard-of-hearing users, and there are some who have decided they won't use the app in the future, even if accessible options become available.

Last year, Twitter's blunder with the early version of their voice tweets drew a lot of negative press. While the company was very public with their apology, stating it was "a miss" to test voice tweets without accessible options and that "accessibility should not be an afterthought," it remains true that they could have and should have performed accessibility evaluations before public release.

Twitter's existing dominance and widespread use puts them in a position to recover. Their apology seemed sincere, as have their accessibility efforts since, and people have moved on. Most apps, especially new apps, won't get that chance. Technology moves fast, and so do people's opinions on whether a new piece of technology is right for them.

There a couple misconceptions around mobile applications that sometimes get in the way of accessibility. Maybe the most important is that apps are automatically accessible because iOS and Android systems are robust with accessibility features already. Voice control, screen readers, screen magnifiers, and many customization options mean that the operating systems do what they can so that accessible apps will be fully usable by as many people as possible; but they don't automatically correct accessibility issues or violations.

Like any website or other digital channel, accessibility testing should be performed according to a specified plan by a reputable auditing firm. Ideally, testing and remediation should happen before public use, but it's never too late to improve.

When we testing a mobile application, we provide: prioritized recommendations so developers and project managers can prioritize the most critical issues first; full audit findings, giving insight and remediation suggestions for all issues identified by our subject matter experts in our four-point hybrid testing; integration, delivering reports that can be uploaded into existing bug-tracking software; and support, which we encourage all clients to choose. 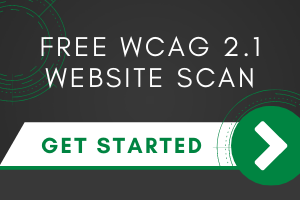