Carlos Herrera, who has a vision disability, filed two lawsuits detailing alleged barriers on Niantic’s website — and within the Pokémon Go app. According to the Department of Justice, Title III of the ADA applies to websites and mobile applications.

The court filing was not immediately available for our review. However, New Jersey Advance Media reports that the lawsuits reference specific barriers that could impact people with vision disabilities:

Herrera is seeking an injunction to change Niantic’s policies, practices, and procedures. He is represented by attorney Daniel Zemel of Zemel Law, LLC.

Notably, the plaintiffs accuse Niantic of failing to provide screen reader support on both its website and within Pokémon Go.

WCAG is frequently cited in ADA lawsuits, and while it’s typically applied to websites, many success criteria also apply to mobile apps.

Related: What Is Accessibility in Mobile Apps?

To create accessible experiences, mobile apps need to think about users with disabilities from day one

When mobile applications fail to prioritize accessibility from the first stages of development, barriers are practically inevitable. In 2016, the American Foundation for the Blind (AFB) published several articles noting accessibility issues in Pokémon Go, including the lack of screen reader support.

“Unfortunately, Unity does not appear to natively support Apple's VoiceOver protocols for communicating element information. To add accessibility to Pokemon Go, Niantic, the company that created the Unity platform, would apparently need to add VoiceOver compatibility from scratch.”

Lee Huffman, editor for the AFB’s AccessWorld blog, noted that the foundation “would be happy to contract" with Niantic to make the game more accessible.

"They probably never even thought of it as a group, but there are over 20 million Americans who have problems reading standard print, even with the best corrective glasses or contacts," Huffman said.

Following the best practices of inclusive design, creators can make digital products that work for more people — including those that don’t live with disabilities.

Pokémon Go, for example, requires users to read their screens in direct sunlight, which may be difficult in many situations. By supporting screen-reading software, the app could potentially find new ways to accommodate its enormous audience.

To learn more, read about our iOS and Android app accessibility testing services or see how your website stacks up with WCAG with a free, confidential web accessibility analysis. 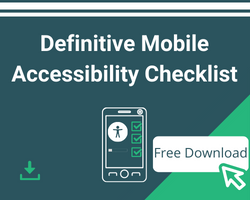