4 Myths About Internet Users with Autism

According to the Centers for Disease Control and Prevention, about 5.4 million U.S. adults live with autism spectrum disorder (ASD). Worldwide, an estimated 1 in 100 children has autism, which often presents with co-occurring conditions like anxiety, attention deficit hyperactivity disorder (ADHD), and epilepsy.

Over the past few decades, autism awareness has grown substantially, thanks in part to the tireless efforts of advocates. However, many myths about autism persist— along with inaccurate stereotypes about internet users who are on the autism spectrum. Below, we’ll address a few of these misconceptions and provide tips for developing more accessible web content.

1. “Autism affects everyone in the same way”

Making assumptions about the skills or social preferences of people with autism can be harmful. Stereotypes reduce the humanity of neurodivergent people.

Recognizing the full scope of the autism spectrum can be difficult — particularly for neurotypical people — but it’s a necessary step. Learning about the four foundational principles of accessibility can help you create content that works for as many users as possible.

It’s true that some people with ASD prefer to stay offline. However, research indicates that children with ASD spend more of their free time on screen media (including computers, video games, and television) than their neurotypical peers.

And in an article for Autism Speaks, autistic author Lydia Wayman notes that social media opens up socialization opportunities for many people with ASD.

“Most autistic people want to socialize,” Wayman writes. “The problem is that social settings tend to be confusing, overwhelming and not very sensory-friendly. On social media, we can interact without the added stress of a chaotic environment.”

When websites are designed to be accessible, these users benefit — along with people with vision disabilities, hearing disabilities, and other conditions.

Related: What Is Cognitive Accessibility?

Web accessibility affects everyone, including those with neurocognitive differences. The Web Content Accessibility Guidelines (WCAG), widely considered the international standards for accessibility, include many success criteria that specifically address learning disorders, visual sensitivities, and other issues that are more common among people with ASD.

Some quick examples of how accessible web content can benefit people with autism:

4. “People with autism don’t use assistive technology to browse the web.”

Once again, autism is a spectrum. Many people with autism don’t use assistive technology (AT), but many do.

Some people may use screen readers (software that outputs text as audio) to listen to web content. Others may zoom in on text so that they can concentrate on reading. Others might view your website with high-contrast or low-contrast settings.

To provide a great experience for all of these users, you’ll need to follow the best practices of accessibility. WCAG provides the best roadmap for fulfilling those practices, and by testing your content against the latest version of the guidelines, you can help make the internet a more inclusive and welcoming place.

Because there isn’t a wide consensus among ASD advocates, we’ve decided to stick with person-first language, which is what we use when discussing other conditions and disabilities. We also recognize the importance of word choice, and we invite users to submit feedback by sending us a direct message. 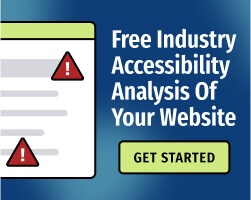